Meet Nikheel Aphale – Gold winner in Callihunt 2016, a competition to recognise talent in calligraphy across India. A trained graphic designer and calligrapher, Nikheel’s fascination with alphabets started at a very young age. Blessed with impeccable handwriting inherited from his mother, he impressed his teachers with shaping his letters. It earned him the honour of decorating the classroom blackboard which provided a canvas to his creative appeal. As he grew, it turned into a full-blown passion for seeing words as more than just alphabets. What makes his work stand out is his evident love for the Devanagari (Indian script) in it.

This fascination of letterforms from an early age, he made an instant connection with calligraphy. After work hours or on weekends, he practised calligraphy at the studio where he worked as a graphic designer. What started as mere fiddling with tools gradually progressed into complete artworks. Albeit amateurish then, he got a lot of encouragement and positive response when he shared it on his blog. This gradually progressed to getting small jobs like invites, greeting cards, nameplates etc. He also got an opportunity to participate in a group art exhibition.

After that there was no looking back. The commercial as well as commissioned assignments kept flowing and he decided to leave his full time job and focus on calligraphy as a profession. What seemed like an uncertain path then is now a full-fledged career in calligraphy and design, thanks to the strong support shown by his wife and family.

He finds immense peace in the bond that he has developed with alphabets. Experimenting of letterforms with different mediums and techniques keeps him going. Through his art, he tries to unveil these forms by deconstructing the structure of the alphabet through various materials—conventional and unconventional.

Alphabets inspire and entice me; they speak to me

Apart from the letters, India — its culture, diversity of its art and crafts- the process in which different aesthetics unfold experiences fascinates him. History, architecture, food, music, textures in nature or even newly acquired papers and inks- anything visually interesting tickles his mind and heart. He also draws inspiration from the works of many international calligraphers (eastern, western, middle east), their passion and how they have developed their own voice.

Juggling between his graphic design assignments and calligraphy art practice gives him very little flexibility to follow a set pattern with his work. However, depending upon the projects he is working on, he still practices calligraphy in his free time whenever he can. On less hectic days he spends time reading, day dreaming, surfing, managing accounts, or playing or making some art with his 5 year old daughter.

As an artist, the challenge to keep on innovating his skills motivates him. He eventually plans to move away from the inks, paper, brushes and explore new dimensions where he can combine letter art with other materials. He wants to develop an exclusive product line purely based on letter art, especially Devanagari script. Collaborating calligraphy with other design disciplines like furniture, textile, lighting, ceramics, and landscape architecture or may be a programmer is something he intends to do in the future. 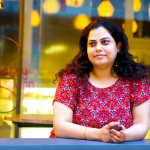